“A painting by Vermeer was propped up on a bookshelf next to a shell. It was unfamiliar – not one of the artist’s few known canvases. The subject looked an awful like Matthew…’

– A Discovery of Witches, Chapter 18

Johannes Vermeer was born in 1632 to Catholic parents; his father was a cloth weaver and a member of the Guild of St Luke as a painting dealer. Vermeer’s work is known from 36 extant paintings. His total output has been estimated between 43 and 60 paintings, or two to three for the years he was active as a painter. Vermeer’s paintings are typified by his attention to detail within the composition of his quiet interiors, as well as his focus on women. While they portray a sense of reality, the scenes are most likely constructions of the artist. They lack narrative and the interiors portrayed are general impressions of anonymous 17th century Dutch interiors.

17th century Dutch art is defined by various types of paintings: history, landscape, portraits, still life, and genre scenes. Some of Vermeer’s early paintings show an affinity with history painting with their dramatic religious subject matter. However, the middle and late phases are typical genre scenes, depicting the interiors of homes. In many of these paintings, a woman is shown at a task – making lace, pouring milk, learning to play an instrument, or writing/reading a letter. Dutch art included the visual representation of the conception of the family as a reflection of the national state. Emblem literature was popular in the period and circulated with pithy phrases and related images that were adopted in various painting types, imbuing greater meaning into the contemporary Dutch art. Such literature stressed the importance of the well-ordered family and giving to the poor.

While he was born to Protestant parents, the artist converted to Catholicism before marrying Catharina Bolnes in April 1653. The couple had eleven children, four of whom died in infancy. In December of that year, Vermeer was admitted to the Guild of St Luke in Delft at the rank of Master, meaning he could practice and sell his works in the city. His main patron Pieter Claesz van Ruijven had the right of first refusal for any of the artist’s paintings, and, at the time of his death, had 21 of Vermeer’s paintings in his possession. Upon Vermeer’s death, his wife was forced to declare bankruptcy, and his paintings were auctioned off. Until a 19th century “rediscovery,” the artist was largely an obscure figure in art history; his popularity has only increased since. 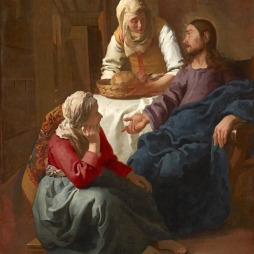 Christ in the House of Mary & Martha. National Gallery of Scotland (NG1670). 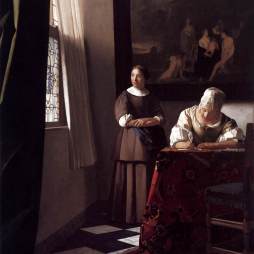 Vermeer’s possible use of a camera obscura in the composition of his images has long been debated, with proponents of the theory noting the unfocused and blurry qualities of details in some of his paintings, such as the thread in The Lacemaker, as evidence. Opponents point to the possible knowledge that, while he was aware of the technology and associated philosophies, he was unlikely to use it. They also argue that to suggest he used the camera obscura ignores the commonalities in composition and technique throughout his known oeuvre, as well as his known source material.